We asked the groups that took part in the Hwange Game Count to submit a story and the winner will stand a chance to stay a stay at Somalisa Camp, we decided on the rescue that Moira Thompson and her team witnessed at Rays Pan on the Somalisa Concession, here's her story:

We arrived at Ray’s Pan in the Somalisa conservancy for the WEZ game count just before midday. We felt privileged being there, and it was wonderful to know that our home for the next 24 hours would be the platform. Climbing the stairs and surveying the pan and its surrounds, we noticed a female elephant lingering in the mud and wondered why she would do this? We soon learned from an employee of Somalisa, that her baby was stuck in the mud, and on closer inspection through the binoculars, we could see a little worm-like trunk occasionally wriggling up like a periscope.

Assuring us that they would be back shortly to rescue the victim, we set up camp, continually keeping a watchful eye on the mother and calf. For the next hour, mother elephant pawed at the sticky mud, distraught, trying desperately to free her calf, pacing around the rim of the pan, calling to fellow members of the herd to help her, then returning to shade her baby from the midday heat. The mother’s sunken shoulders and dejected stance were heartbreaking to witness. 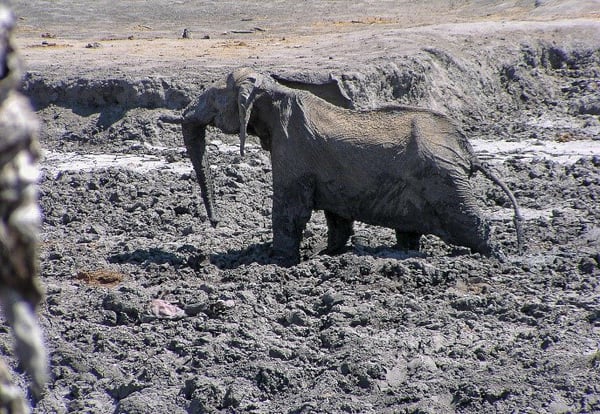 A while later, the Somalisa team returned, banging on the side of their vehicle to chase the mother away so that they could approach the baby. It required the arrival of a second vehicle (also from Somalisa, but they had come to check on the solar pump which feeds water into the pan), which then allowed the rescue team to get close to the baby. Inevitably, Mother elephant was agitated and circling the pan, frantic to return to its side and protect it.

The rescue team sprang into action as soon as she was a safe distance away. Ropes swinging, shovels digging and much shouting ensued, with an eagle eye on mother who was trying to return to her charge.

They put a rope lasso around the baby elephant’s head and under the torso and around the only leg not submerged in the mud. The rope was tied to the vehicle waiting at the edge of the pan to release the baby. Bit by bit, they pulled, and the elephant was released from its quagmire, bumping along as it went and squealing its way out of the gluey mud.

He lay on the lumpy pan ground a while, gathering its depleted strength, which gave the Somalisa heroes time to untangle the rope. We gasped with emotion as the little one slowly staggered to its feet, made its way unsteadily to edge of the pan and clambered up the bank, dragging up its hind legs. Overwhelming relief and a few tears caused by pent up emotion enveloped us all. 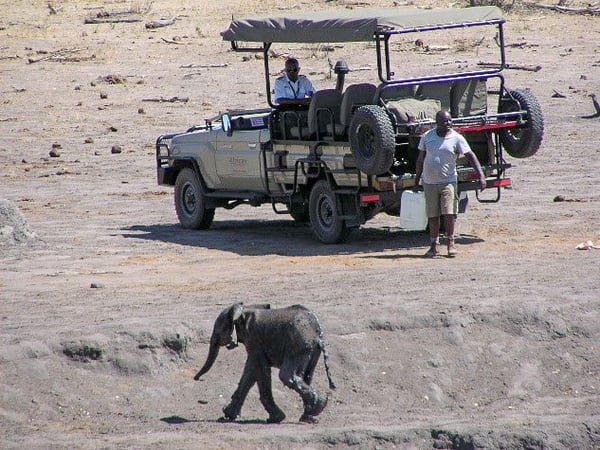 Baby toddled off towards the vehicle, sniffed it, trumpeted indignantly and then moved off towards the tree line, unaware of which direction it was taking. The ever-alert mother, who was on the other side of the pan, quickly lumbered over towards her calf, and there was a tender reunion, a twisting of trunks.

Mother elephant turned, acknowledged the rescue team with an appreciative rumble, and she and her calf trundled off, disappearing into the bush. 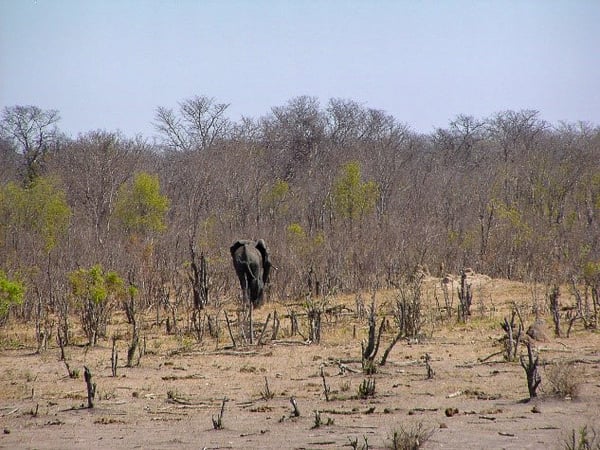 Thank you team Somalisa for such caring and having us to stay!