How African Animals Care for their Young

All animals (both big and small) need love and tender care to survive in the wilderness. Baby animals are born helpless and just as humans they too need to rely on their parents to help protect and keep them nourished. There are many different classes of species in the animal kingdom (birds, amphibians, reptiles, fish and mammals) and each have their own unique way of taking care of their young ones.

Just as our parents, animal mothers stay with their young until they are ready to survive on their own. Some baby mammals take up to 6 months to slowly move away from their parents while others will stay with them for life.

When it comes to his pride, male lions play a dominant role and can be a potential threat to a new born cub. This is one of the main reasons a lioness will give birth away from the pride. When born, lion cubs are blind and will suckle from their mother, absorbing all the nutrients from her milk. At three months, her cubs will slowly be introduced to the art of hunting but will be the last in line for a meal until they are a year-old and able to hunt on their own.

Interesting Fact:
A baby lion is also known as a cub, whelp or lionet. 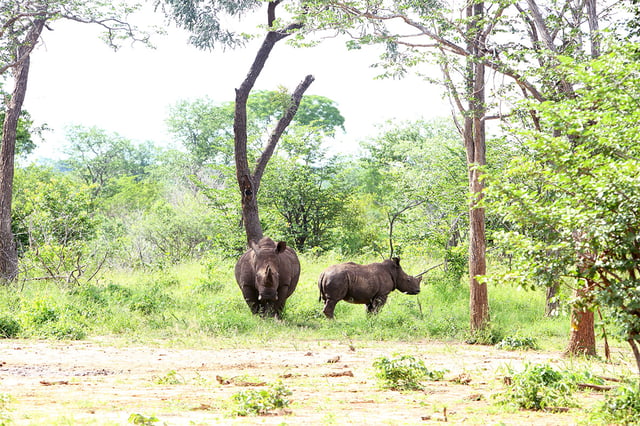 Rhinos are certainly one of Africa’s most fascinating creatures, and sadly the most endangered. In Africa we have two different rhino species – the wide-mouthed white rhino and the hook-lipped black rhino. At birth, a new born rhino calf can weigh up to 45 kgs and is reliant on their mother for between 2 to 3 years of age.

Although a black and white rhino are from the same species, let us look at some differences between the two.

For 18 months a rhino calf will suckle from its mother. During this time, the white rhino will take its young to areas where grass is plentiful. Here, the rhino calf will slowly wean off its mothers’ milk and begin savouring the sweet vegetation. White rhinos are bulk grazers which means they aren’t selective when it comes to what grass they consume.

Rhinos have excellent hearing and smell which makes up for their poor eyesight. Black rhinos are browsers and have a prehensile upper-lip which means that once the calf is ready to feed on solids, it will begin to grasp on leaves and shrubs.

Not only are elephants Africa’s largest land mammal, but they also give birth to the Earth’s most adorable (and clumsy) babies. The family dynamics of an elephant herd is quite an interesting one. A herd of elephants are made up of sisters, aunts, cousins (lots of potential nannies) and led by a matriarch – normally the eldest female in the herd. When a potential threat is near, the herd will huddle around their calves, trumpet and throw dust in the air. At 14 years of age, male elephants will wander off from herd while females will stay.

Interesting Fact:
Seeing a baby elephant barely 3 months old and having to grasp control of its trunk with 40 000 muscles can be quite a show.

Have a look our family safari itinerary, here