How Your Stay Can Help Endangered Species

May 15th is Endangered Species Day - a day to celebrate and learn about endangered species and how we can protect them. Since conservation forms a big part of who we are, we have decided to dedicate an entire week to our endangered species.

Once found throughout Africa, large wild dogs populations are now only found in Botswana, Zimbabwe, Namibia, Zambia, Tanzania, and Mozambique.

Wild dogs (also known as Painted Wolves) have become endangered due to habitat loss, human-wildlife conflict and their susceptibility to diseases. Wild dogs need vast amounts of space to roam and now, due to their shrinking habitat, wild dog populations are declining.

There are numerous conservation efforts to try and implement protected wildlife corridors that help connect their increasingly fragmented habitats. These conservation groups also work on initiatives to reduce conflict between humans and wild dogs, such as livestock management training.

Join us in Mana Pools for our Painted Wolves Safari with Nick Dyer, an award-winning photographer and author of the coffee table book ‘Painted Wolves, A Wild Dog’s Life’. This 6-night safari will have you following the Wild Dogs of Mana Pools with Nick Dyer, along with our knowledgeable and passionate African Bush Camps guides. Find out more about this safari here.

“I grew up on the outskirts of Hwange National Park in Zimbabwe. One day, my family and I were banging pots and pans to chase the elephants out of our garden. When they left, I followed them for over three miles into the middle of the bush and got within 40 yards of the herd. The mother elephant turned around, and I thought she was going to charge. I turned around and never stopped running until I got home. At that point, I thought, wow, that was quite an adventure!"

It was at that moment that our founder Beks Ndlovu decided he wanted to become a safari guide. Fast forward to today, and we owe African Bush Camps to that elephant.

If you have ever visited our camps, you will know that the elephant plays a significant role in who we are. These incredible animals symbolise elegance, intelligence, memory, empathy, gentleness, and are intentional in their actions. Elephants are very social, frequently touching and caressing one another and entwining their trunks.

Unfortunately, poaching for the ivory trade is the biggest threat to African elephants’ survival, followed by loss of habitat and human-wildlife conflict. Though CITES banned the global commercial ivory trade in 1989, the illegal trade remains strong, and poaching continues across the continent.

African elephants are also losing their habitat as their land is converted for agriculture and development. Elephants need a lot of space to roam, so habitat loss makes it harder for them to find food and water, and it puts them in increased conflict with humans sharing the land.

Conservation groups are working hard to set aside land for wildlife and conservation and raising awareness to end ivory demand by educating consumers about the real cost of ivory products. These groups also work with communities who live in close quarters with wildlife, to recruit, train, and equip wildlife scouts.

If you look closely you will notice our logo is an abstract profile of an elephant and we hope to embody these qualities in our work & company. 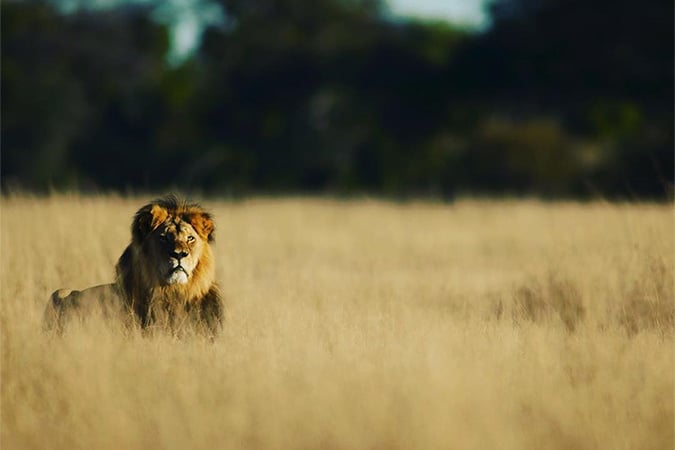 One famous story comes to mind when thinking on the topic of lions and conservation, and that is the story of 'Cecil the Lion'.

Cecil the lion. A legend in Hwange National Park. A true drama, a story of territory, a coming of age and a power struggle of coalitions. Cecil was a force of nature; he exuded a supreme prowess. He was so prominent that many travellers came from far and wide to see him. The epitome of what you would expect a lion to represent — a true legend of the land.

However, in July 2015, Cecil met his unfair and cruel fate. He left the safety of the National Park and crossed over into a hunting concession where he died at the hand of a hunter. This caused a major uproar across the globe, and many were made aware of the prevailing wildlife conservation crisis.

While the death of Cecil was a big blow to conservation, many safari lovers and operators on the ground wanted to do some good for the conservation of lions. This brought about a local initiative within Hwange National Park, called the Conservation & Wildlife Fund (CWF). This initiative aims to ensure that iconic species such as lions, elephants and rhinos survive. By collaborating with the CWF, African Bush Camps is making sure that lion protection is a priority, and this is all part of the legacy of Cecil.

Today, Cecil's cubs still roam in the Somalisa Concession, and the story of Cecil's Pride continues. As the cubs grow up and the pride shifts and changes, people from around the world come to see his legacy live on.

Come and see Cecil’s family for yourself. Our Somalisa Camp, Somalisa Acacia and Somalisa Expeditions are all situated in the Somalisa Concession and a run-in with Cecil’s pride is always a wonder to see.

Read the full blog on Cecil's Rise and Fall, Part 1 and Part 2.

The cheetah is the world's fastest land mammal - it can reach speeds of 60 mph in just three seconds!

However, it seems as though the world’s fastest land mammal is sprinting towards extinction. It is estimated that there are only 7,100 cheetahs left in the wild and it is estimated that this number may decline by an additional 53% over the next 15 years. Based on these results, scientists are calling for the cheetah’s status to be changed from “vulnerable” to “endangered” on the IUCN Red List.

These big cats once roamed nearly all of Africa and much of Asia, but their population is now confined predominantly to only six African countries: Angola, Namibia, Zimbabwe, Botswana, South Africa, and Mozambique.

Cheetahs' biggest threats to survival are habitat loss, human-wildlife conflict and poaching for their skin.

There is enormous potential for the population to rebound quickly, which is why there is a big push to get Cheetahs re-classified as endangered, so they can benefit from conservation

efforts. “The new conservation status would provide a platform for these groups to try and reverse the trends affecting cheetahs. For instance, such a change can create openings for funding streams that are available only to endangered species” says study leader Sarah Durant of the Zoological Society of London.

By now, you might be asking yourself a few questions.

What does ABC do to help with conservation? And what can I do to help? Why choose Africa over other destinations?

Visiting Africa has a huge positive impact on conservation. Not only does tourism mean more guests in parks and less space for poachers to hide, but it also provides livelihoods for the community members in vulnerable wildlife areas. By linking these jobs to tourism, communities embrace these conservation activities and are less likely to resort to poaching.

Conservation groups work hard to show the community the value of wildlife tourism as it provides jobs for them and their families. The more support given to these wildlife areas, the more safari operators can maintain sustainable projects that empower communities through mutual partnerships, provide support for education, and implement sustainable conservation projects.

When you stay at any of our Zimbabwean camps a conservation levy of $15 is included per person per night, which goes directly to conservation groups.

$15 is provided to the CWF to aid in protecting and conserving the wildlife in Hwange National Park.

The $15 is split 50/50. The first half goes to Bumi Hills Foundation which aids in anti-poaching in the area. The other half is dedicated to our own conservation, community empowerment and education efforts through our African Bush Camps Foundation.

In partnership with Zimbabwe National Parks & wildlife authorities we have deployed an anti-poaching unit to safeguard the wildlife in the area.

We are also a member of the Lion Recovery Fund for the LionScapes coalition that seeks to protect the lions of not only Mana Pools, but of all of Africa.

The more you visit Africa, the brighter the continent's future looks.