Keeping a healthy distance apart is a priority for people all over the world these days. But deep in the bush of Hwange National Park in Zimbabwe, it has been front-of-mind for our longstanding guide Calvet Nkomo for decades. As head guide of our award-winning Somalisa Camp, one of our 15 luxury tented bush camps and lodges offered by African Bush Camps (ABC) across Botswana, Zimbabwe, and Zambia, Nkomo is a natural at giving wildlife their space while leading walking safaris for guests to appreciate the beauty and majesty of the wildlife in their midst.

Born in Halisupi, Zimbabwe, Nkomo was raised by his grandparents after his mother was unable to nurse him. The two gave the youngster goat and cow’s milk, plenty of love and care, and, as he grew, the African name Ndalaboy – “big boy” grew on him. His grandfather, Madimabi Mike Sibanda, was a role model who among other things taught Nkomo the skills to live by.

A warm, welcoming, and larger-than-life spirit who smiles broadly between sentences and enjoys singing traditional songs, Nkomo, 54, has been guiding since 1995. He joined ABC in Zimbabwe in 2012. Nkomo has long since become familiar with the prides of lions roaming Hwange. “I know them by name and consider them family,” he says, noting in particular Cecil’s pride, Africa’s true Lion King who, after being tracked by collar and extensively researched, became so prominent that travelers began descending upon Zimbabwe just to see him. An American big-game hunter killed Cecil in 2015, a big blow to conservation and Hwange National Park visitors alike. Nowadays, travelers come to see Cecil’s decedents, who roam the park in abundance.

According to Nkomo, there are three “zones” of distance guides must recognize when leading guests to view game on walking safaris in the bush: 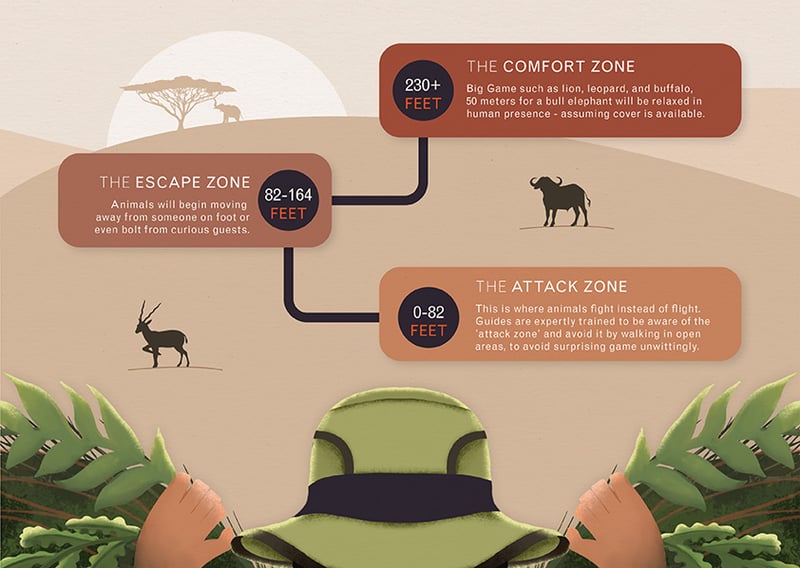 Named “Zimbabwe’s Leading Tented Safari Camp” by World Travel Awards 2019, our Somalisa Camp offers amazing views of the beautiful golden savannah of Hwange, and endless possibilities for travelers to soak up the scenery on walking safaris, game drives, birding, and cultural visits. Likely wildlife sightings for guests include elephant, kudu, sable antelope, zebra, wildebeest, gemsbok, and rare and endangered roan antelope, as well as buffalo, giraffe, lion, leopard, hyena, and more. As at every ABC camp, all outings within the Somalisa private concession or national parks are led by qualified ABC guides who are excited to share their knowledge and passion for the bush they call home.

We welcome guests age 7 and over year-round at Somalisa Camp and have a specific family-friendly Somalisa Acacia that offers children of all ages. Take advantage of African Bush Camps’ ‘Once in a Lifetime” safari special and Book Now, Travel Later.

For more information on Somalisa Camp or to make reservations at any African Bush Camps destination, visit https://africanbushcamps.com/